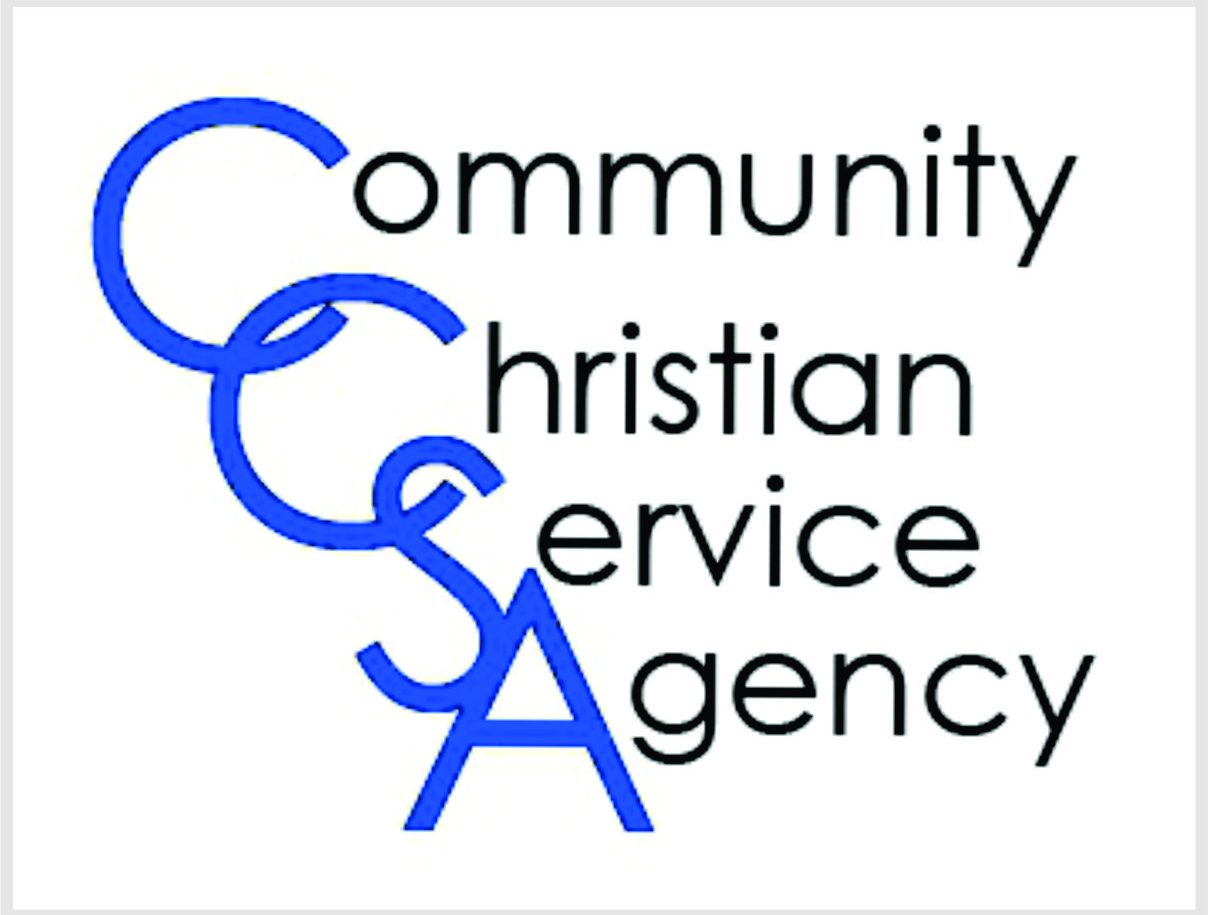 A homeless man name Jesse frequently visited our Pacific Beach facility.  Often, he just needed someone to talk to or seek clean clothing.  From out of state, Jesse had come to San Diego in the hopes of cleaning up his life and was in desperate need of guidance and direction.   He had suffered the loss of an eye from a broken bottle injury, lost his ID and belongings and was living in his car.

His simple goal was to, one day, go back home – take his mother to a restaurant for dinner and become a better father to his four children.  CCSA wanted to help Jesse reach his goal.   In time, things got better; he found a job as a dishwasher, worked hard and kept saving his earnings.  A few months later, we were delighted to receive a note from Jesse telling us that he was finally able to make it home!

The mission of the Community Christian Service Agency, an ecumenical Christian agency, is to provide emergency services to individuals and families in need in San Diego County, including food, clothing, and referrals, and where practical, counseling to assist in their transition to self-reliance.

Thanks to a Herculean effort by the staff and a handful of volunteers, CCSA was able to keep both Centers open last Tuesday serving the hungry.

At Clairemont, we served 75 families, up from 60 on Monday.  In Pacific Beach, we served 42 lunches and 45 snacks.

We continue to operate mostly without volunteers.   We have received contacts from multiple agencies offering us help with volunteers. The Food Bank issued a televised appeal for volunteers to help at the Food Bank, and at distribution points such as ours.  We do not know yet whether will be able to obtain any help from any of these sources.

Please pray for CCSA and those we serve, both the homeless who are hungry, cold and wet, but also the food insecure whose numbers are increasing daily as people are told not to come to work.  Although “shelter in place” orders have been issued, we expect that we will be deemed an “essential service” and remain open for as long as we have supplies and staff.  Thank you! 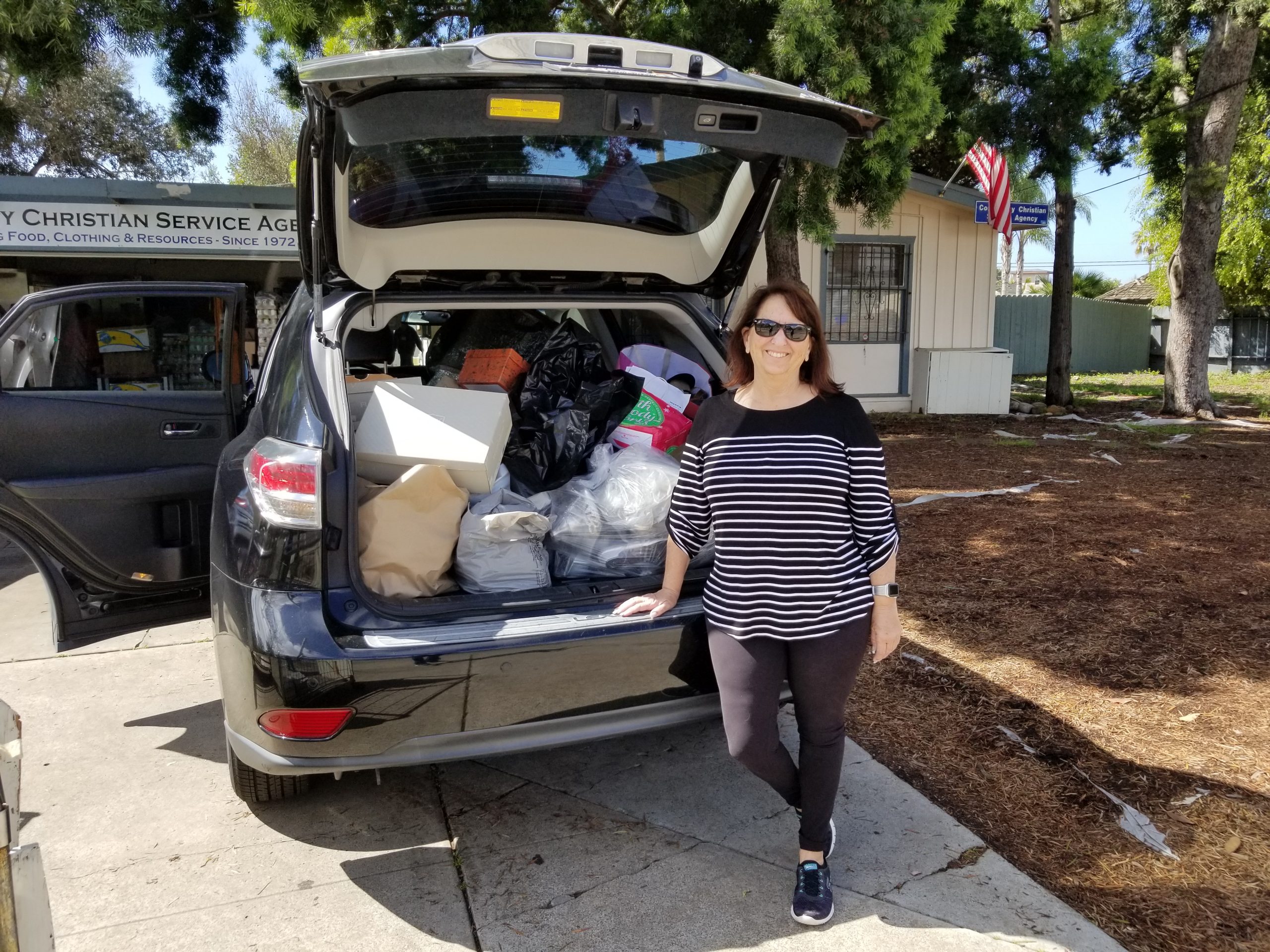 We received 124 pairs of shoes from Harriet Preovolos who had a shoe drive for CCSA! Thank you Harriet!

Years of work pay off one success at a time

My name is Liz and for about 4 years I received services from CCSA-Pacific Beach. The kindness and help I received there really changed my life. I feel as though the staff and volunteers genuinely care about the people they serve. They touched my heart and gave me belief in myself and the courage to seek out the help I needed. I was always treated respectfully and with such amazing kindness. They loved me when I was not able to love myself. I am very proud to report that I am currently living inside in Indiana and I have a beautiful son. I am getting counseling, I am working, and I am completely sober off all drugs and alcohol. Thank you for all the food, clothes, and books over the years. And more importantly thank you for treating me with dignity ALWAYS and assisting me in getting my life put back together. I am so happy and full of gratitude!

A SUCCESSFUL COZY IN CLAIREMONT COAT DRIVE! THANK YOU! 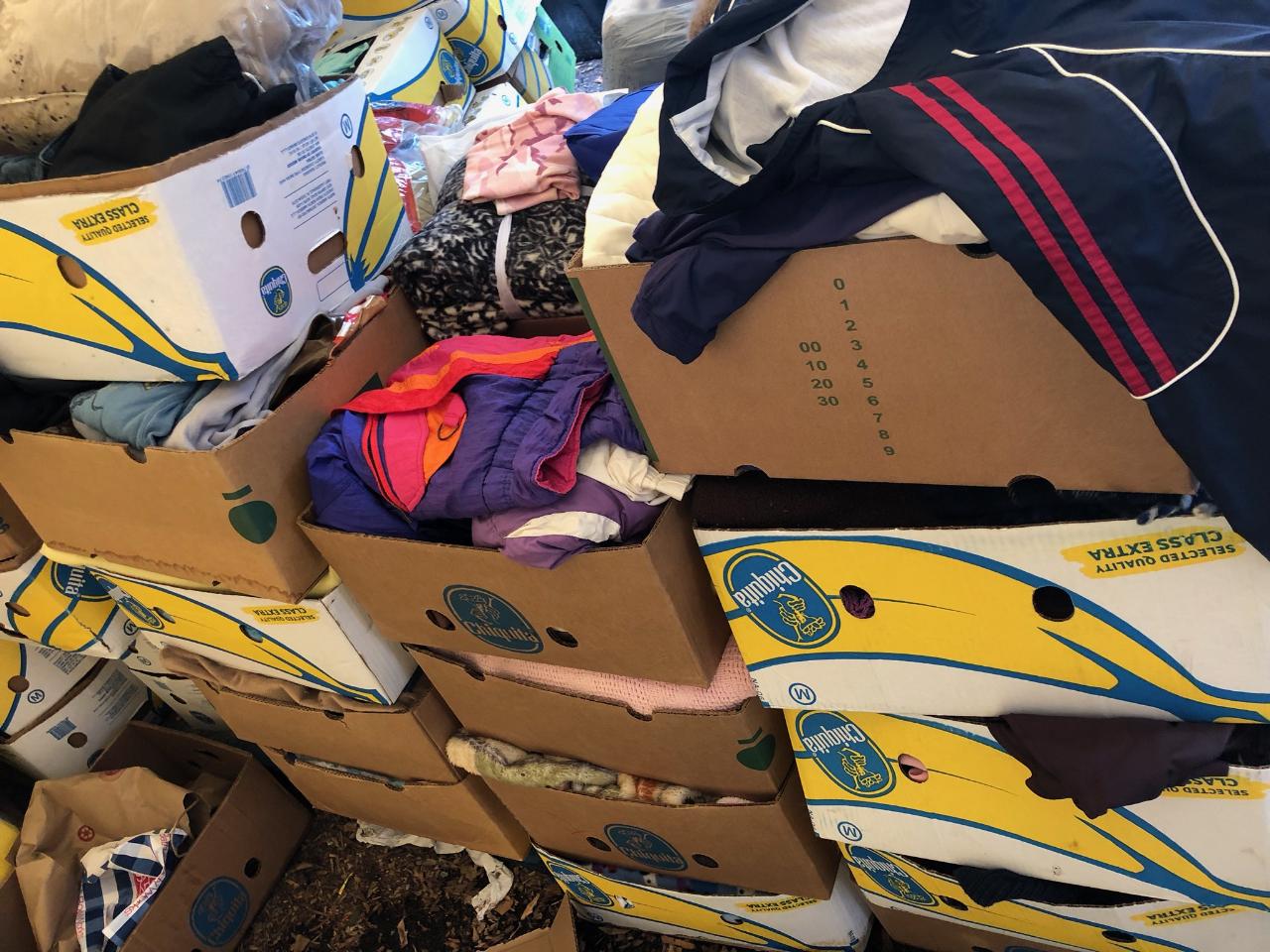 The Third Annual Cozy in Clairemont Coat and Blanket Drive was a total success! CCSA received Cozy in Clairemont received 129 Blankets, 52 Pants, 135 Sweaters, 179 Jackets, 24 t-shirts and 3 Sleeping Bags! We thank Natalie Klinefelter and Legacy Real Estate Co. for organizing this event and we thank YOU for your support!

THE 2019 BACK TO BACKPACK PROGRAM WAS A SUCCESS!

Thank you to everyone involved! With your help, CCSA distributed 792 backpacks to children this year!  AMAZING!  THANK YOU!

DONATION OF 118 BACKPACKS! THANK YOU

Thanks to Sabrina Stern, Christ Lutheran Church members, and Thrivent Financial for their donation of 118 backpacks stuffed with school supplies for CCSA's Back to School Program! Thank you!

Just a few of our happy students picking up their new backpacks filled with supplies from the Back to School Program!! 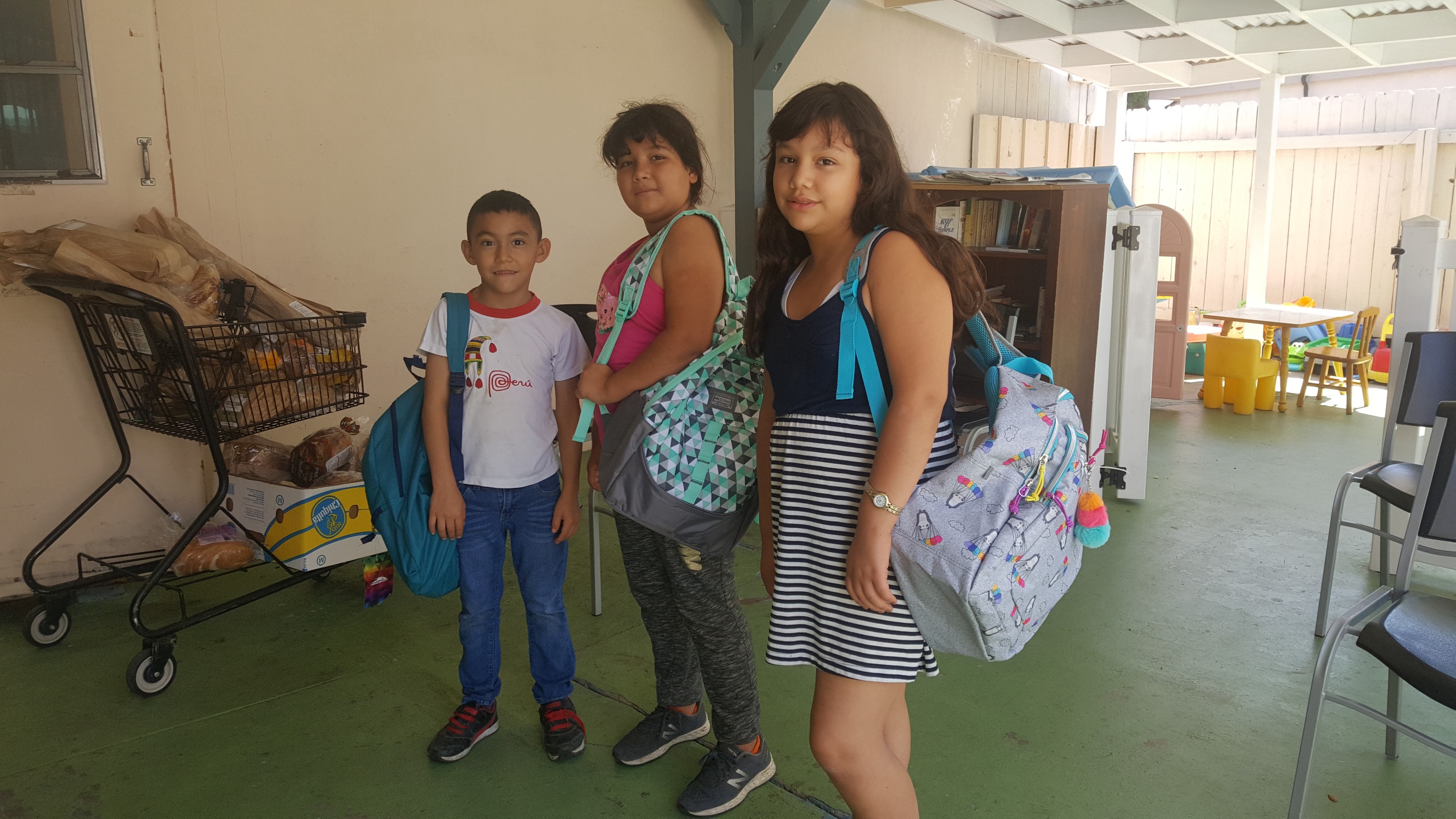 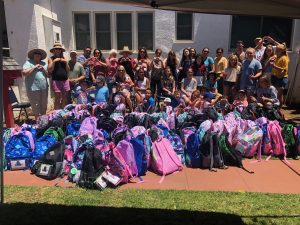 The Shoe Drive Continues! Here is one generous donation from a parishioner at St. Mary Magdalene! 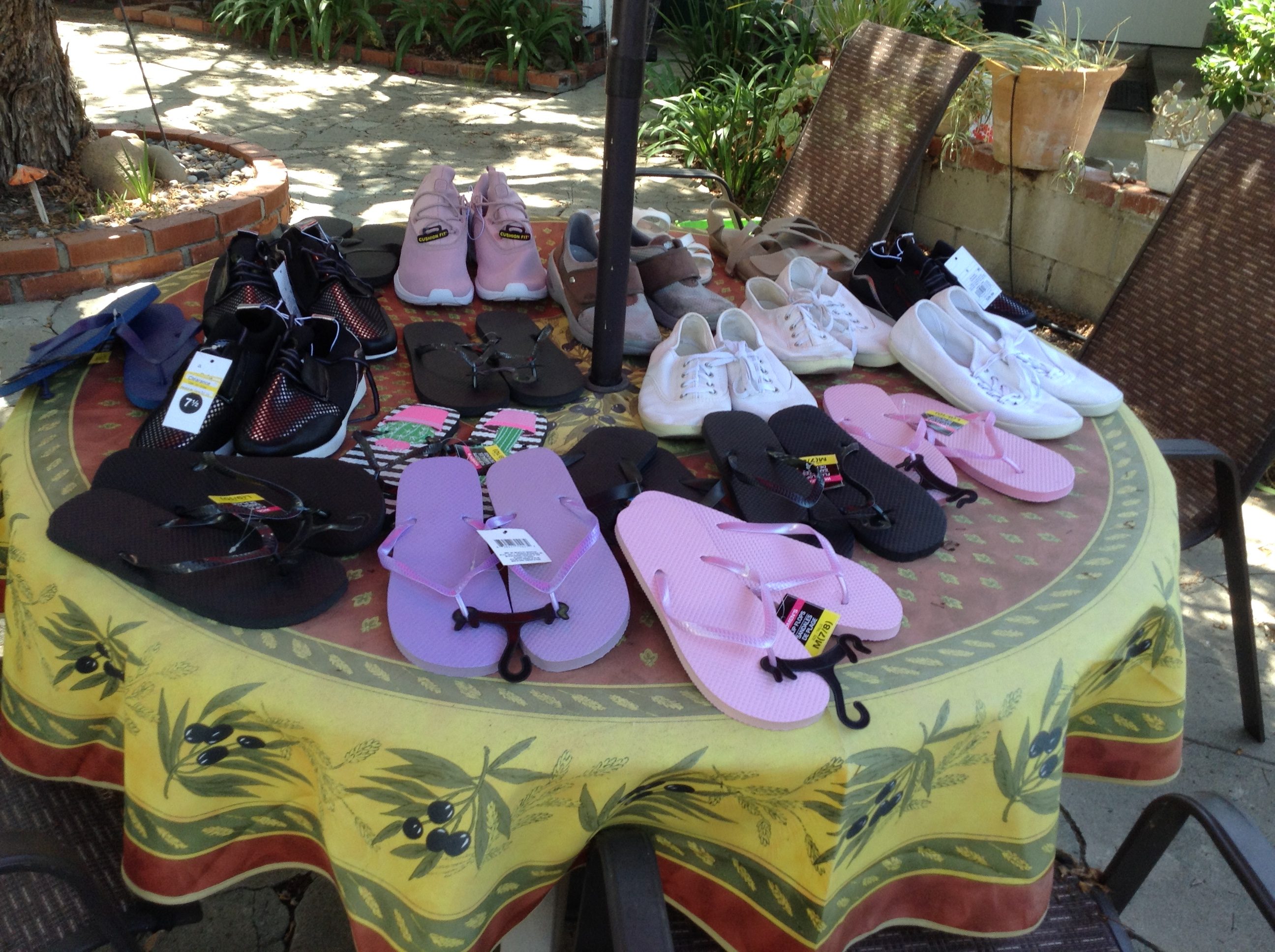 Another donation of 48 pairs of flip flops from another St. Mary Magdalene parishioner! Thank you! 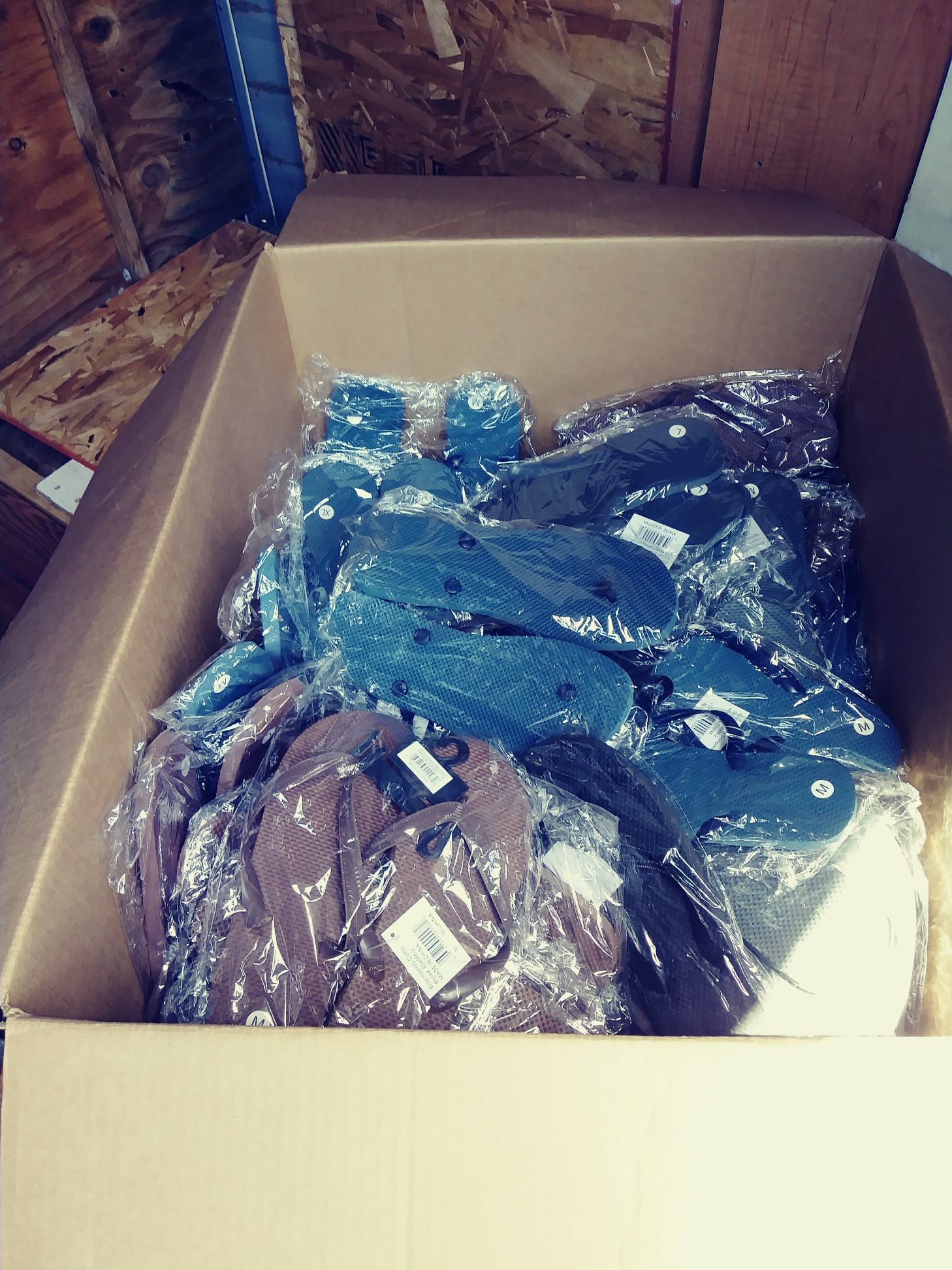 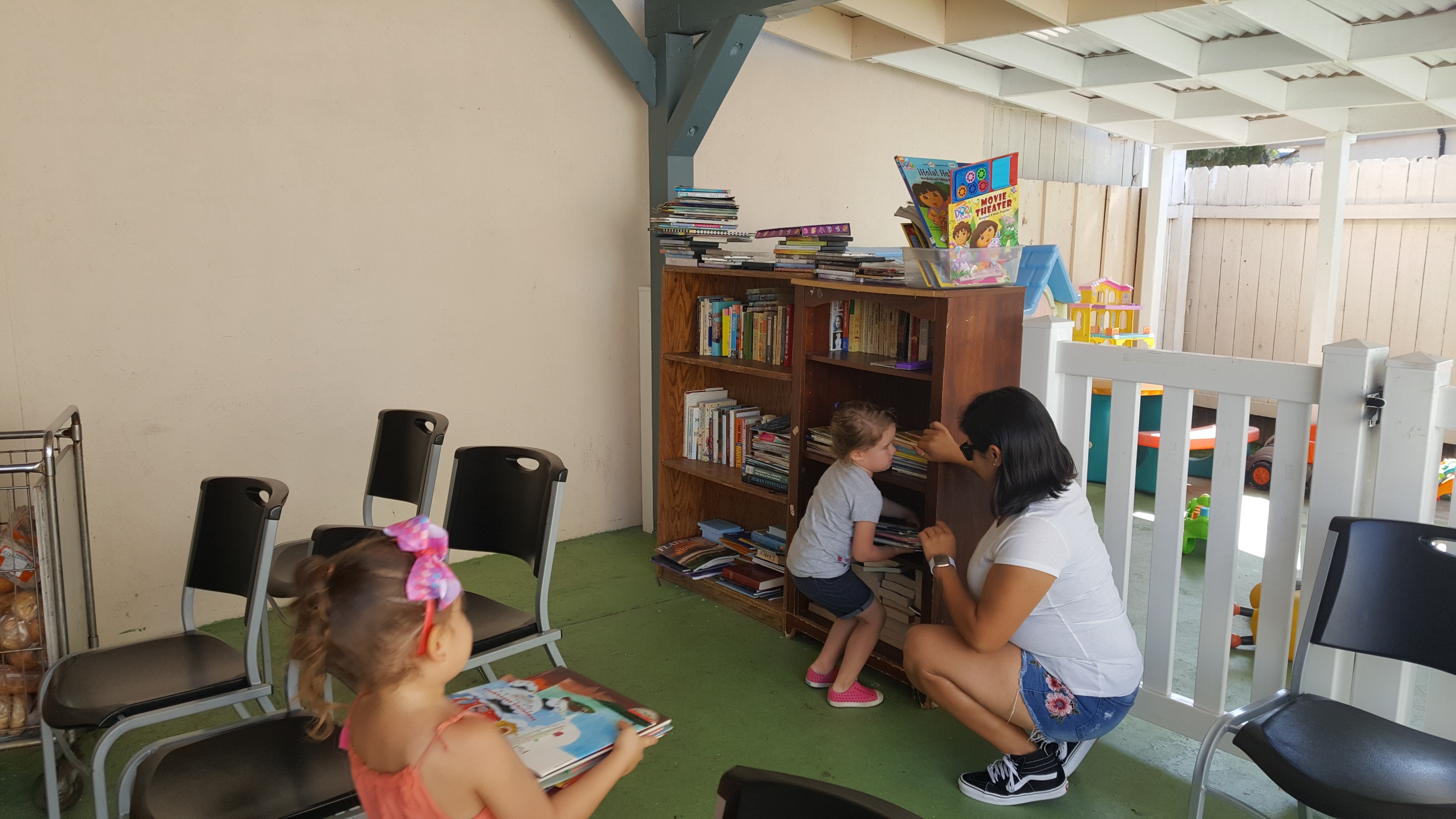 CCSA thanks the children of St. Mark’s United Methodist Church and Preschool who, as a celebration of Holy Week, collected NEW children’s shoes, and over 300 pair of socks, that were donated to CCSA. NEW shoes and socks will be given out as part of our Back to School program. 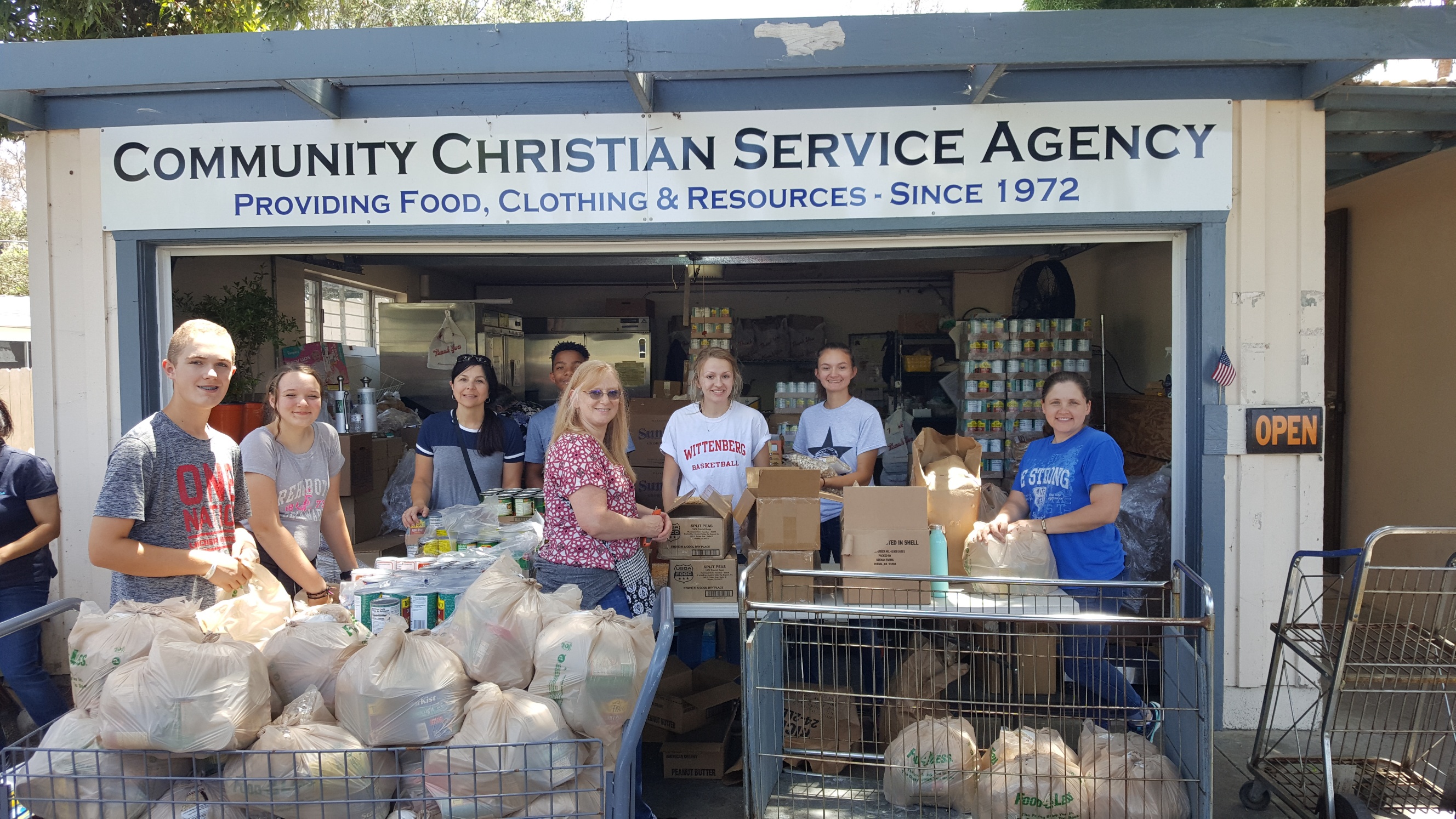 First location: Every 3rd Saturday of each month from 9:00 a.m. to 12 noon. Visit Good Samaritan Episcopal Church at 4321 Eastgate Mall (Genesee at Eastgate Mall) in San Diego, for a warm shower, coffee, breakfast, and clothing! Second location: Christ Lutheran Church- 4761 Cass Street, San Diego, CA 92109. Showers at Christ Lutheran Church, 4761 Cass Street, San Diego: On the third Friday of each month, hot showers are offered to our unsheltered neighbors. Meet in the Garman Hall area. Numbers are given from 9am to 9:30am. Showers start at 9am and the last shower is at 11am. We are able to provide showers to 20 people. Towels, soap, and shampoo are supplied. We often have socks and underwear available for women and men. We also serve a free lunch each Friday - starting with coffee at 11am and lunch at 11:30am.

As we listen to voices that too often are not heard, let us put ourselves in the place of those who cry for assistance.  CCSA shares this true story for awareness of those who struggle, fight for a sleeping place, are hungry, and often cold and gripped with fear for their safety.  Many simply don’t know what happened, it all developed so fast.  A crisis is a crisis, no matter how it took place.  How can we help and shouldn’t we always respond?
Please read this story.  How would you do things?
Written by
Mark Horvath, Contributor Founder,
Invisible People
Published in the Huffington Post
https://www.huffingtonpost.com/mark-horvath/my-first-night-homeless_b_850145.html

SOCK DRIVE! THANK YOU TO THE INTERNAL OPERATIONS BRANCH FOR THE CITY OF SAN DIEGO AND ITS 500 EMPLOYEES FOR THEIR SOCK DONATION! 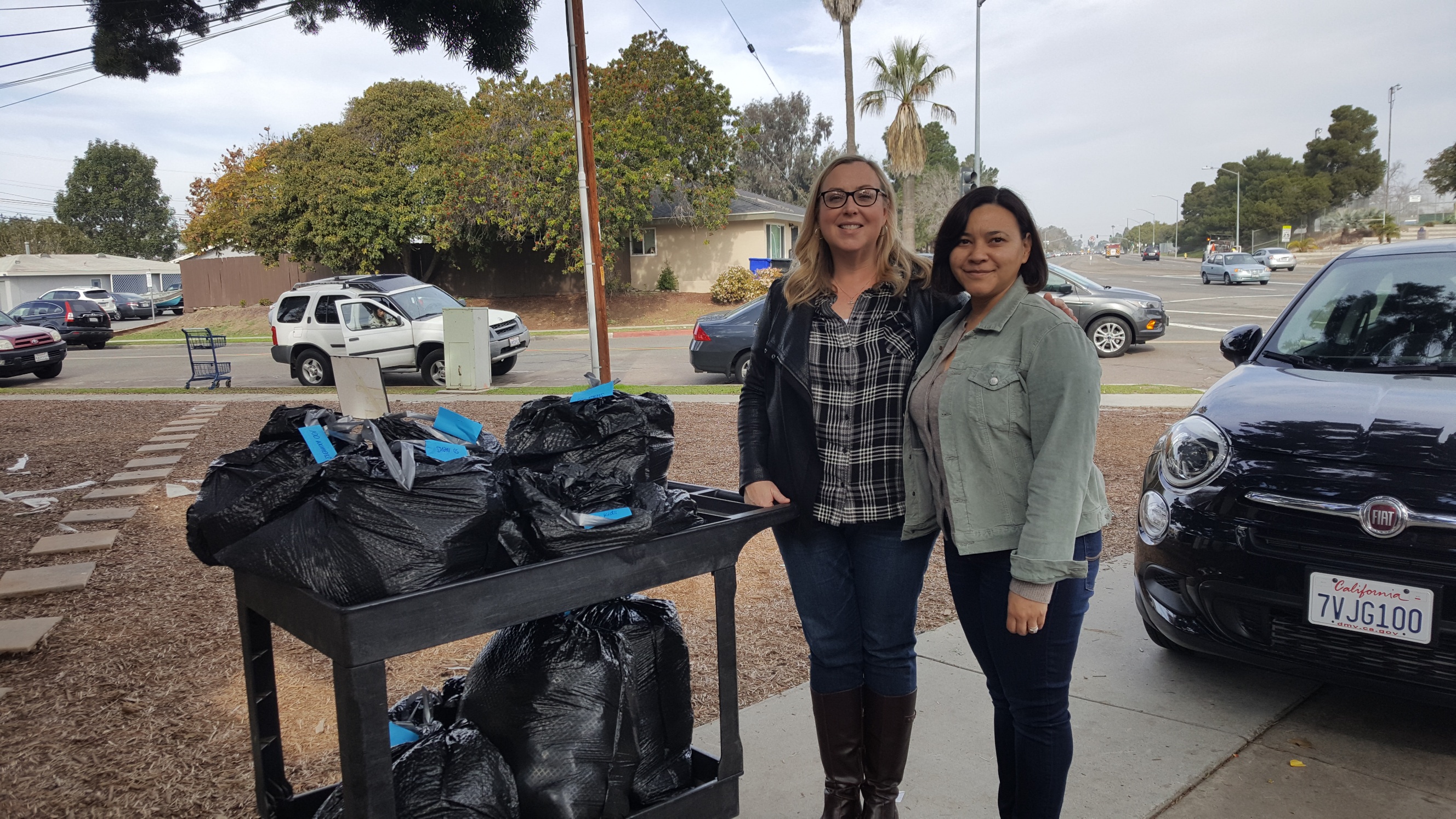 The Internal Operations Branch for the City of San Diego -- which oversees the five departments of Purchasing and Contracting, Real Estate Assets, Information Technology, Fleet Operations and Human Resources, and represents over 500 City employees -- has generously donated 750 pairs of socks for men, woman and children in need from their "Sock Drive" to CCSA! This "Sock Drive” was a voluntary effort established and organized by the Branch's own employees to give back to our communities during the holiday season. The generous efforts of these employees generated over 2,000 pairs of socks that they shared with three different organizations including CCSA. CCSA thanks you all for your generous spirit from the top of our heads to the tips of our clients' warm toes! THANK YOU!

THANK YOU TO SPROUTS AND ITS SHOPPERS! 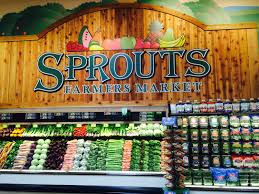 THANK YOU to Sprouts on Clairemont Drive, Genesee Avenue, and Rosecrans Street, and their shoppers who purchased filled "brown bags" of groceries, for their donation to CCSA! Sprouts and their shoppers are consistent supporters of CCSA and we apprecriate them!

THANK YOU TO OUR AMAZON SMILE SUPPORTERS! CCSA RECEIVED $75.52 AS A RESULT OF YOUR PURCHASES FROM APRIL THROUGH JUNE! NOT SIGNED UP YET! CLICK THIS LINK!